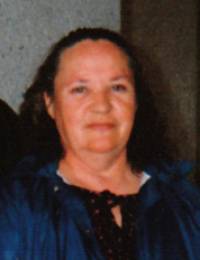 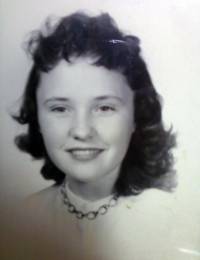 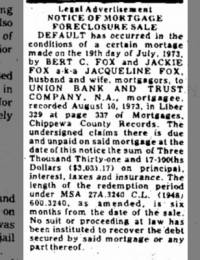 The following was read at Jackie Fox's memorial service and posted on her online memorial site.

Jacqueline ("Jackie") Grace Lampman was born on January 1, 1942 in Butler, Michigan. She was part of a large family, with four brothers and three sisters. Her parents were Bryan Lampman and Margaret Stahlhood. Jackie attended Delton High School in Delton, MI before finishing her diploma via correspondence at American School.

In 1962, Jackie married Bert Charles Fox. Together they would have seven children: Bert Fox II ("Chuck"), Garry Fox, Becky Fox, Rhonda Fox, Richard Fox, Julie Fox, and Eric Fox. Richard Fox died as an infant, and this experience was devastating for Jackie, who loved all of her children deeply. Jackie and Bert were divorced in 1978, remarried later that same year, and divorced for a final time in early 1979. The Fox family moved frequently, living for various lengths of time in Michigan; San Francisco, CA; Las Vegas, NV; and Kelso, WA.

Jackie was the primary parent and provider for her six children, and held a variety of jobs throughout her life to support her family. As someone who loved the outdoors and working with her hands, she particularly enjoyed her job as a groundskeeper at a golf course in Kelso, WA. She spent the majority of her working years employed in the kitchen of the Desert Inn Hotel & Casino in Las Vegas, where she made many lasting and important friendships with her co-workers. She also worked at Caesar's Palace and the Hacienda Hotel on the Las Vegas strip.

In 1992, Jackie moved to Minnesota to help her son Garry care for his terminally ill wife and their two sons. She remained there for several years before eventually moving with Garry to Georgia. Most of the last decade of her life was spent in retirement living with her daughters Julie and Rhonda in a house they owned in Cartersville, Georgia. In Cartersville she enjoyed spending time tending her garden and working on household maintenance tasks before her health problems made these things difficult, and delighted in the company of her great-grandchildren, Brenna, Kassidy, and Vanessa, who also lived with them much of the time.

After losing their home in Cartersville to foreclosure in April 2011, Jackie moved with Rhonda and Julie to Tampa, Florida. By this point Jackie was having serious heart problems and was in need of quadruple bypass surgery, but she and her doctors were hesitant to move forward because they were not sure she would survive the operation (her diabetes and other health issues complicated matters). Aside from the physical challenges of her health problems, Jackie was also saddened that her health was now greatly limiting her mobility, making it difficult for her to enjoy the things she loved so much, such as playing with her great-grandchildren, spending time outdoors, driving to yard sales, and playing bingo.

In October 2011, Jackie's son Garry asked her where she would most like to live, and she responded "Las Vegas." She and her family had spent many years in Las Vegas, and her youngest son, Eric, had recently moved back there with his wife and their infant daughter, Veronica. Garry quickly and generously bought a beautiful house in Las Vegas for Jackie, Rhonda, Julie, Brenna, and Kassidy to live in. Plans for making the move began, and Jackie was excited to meet her newest grandbaby and have so much of her family reunited in Vegas.

On December 2, 2011, Jackie, Garry, Rhonda, and Julie began the drive from Florida to Nevada. Jackie, who detested flying, refused Garry's offer to fly her to Vegas despite doctor's warnings that the drive would be difficult for her. Early in the drive she began experiencing swelling in the lower half of her body, and by the time they reached Louisiana, it was necessary to take her to the hospital. She was experiencing severe breathing and heart problems, and had developed a blood clot in her lung. Before sedating her and transferring her to a larger hospital, the doctors told Garry, Rhonda, and Julie that they should say their goodbyes in case she did not make it through the night. After being sedated and transferred to the other hospital, her body went into shock and she quietly passed away the evening of December 6, 2011 with three of her children at her side. Per her wishes, her body was cremated in Louisiana and the ashes brought back to Las Vegas by her family.

Jackie lived a difficult life, but she was always surrounded by family members who loved her. And no matter how difficult her circumstances became, she always worked hard to do the right thing, be honest, and treat others with respect...all while maintaining a sense of humor. She was kind, generous, and absolutely devoted to her family. She taught these values to her children, grandchildren, and great-grandchildren, and she will live on forever through them and the wonderful memories she gave them.